Ultimate Sprintcars and Speedcars race for the memory of a legend 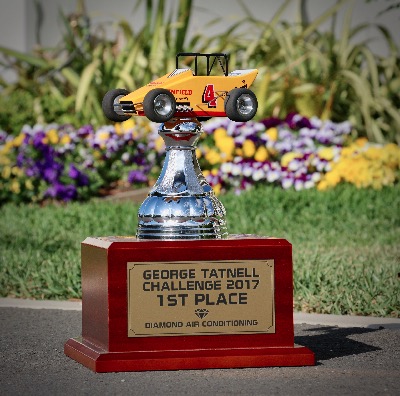 And so it was with Australian Speedway great George Tatnell.

Fans loved him, fans booed him but nobody was without an opinion.

“GT” was a polarising individual.

This Saturday night the two classes he was most passionate about – Speedcars and Sprintcars – will go to their respective wars in the annual “GT Challenge” and drivers are coming from everywhere to compete.

The Ultimate Sprintcar Championship and the Speedcar Super Series will converge on Sydney’s Valvoline Raceway – a fitting venue where George claimed many successes and his son Brooke went on to become a superstar like his father.

Currently there are 29 cars entered for the second round of the Diamond Air-Conditioning Speedcar Super Series and drivers represent NSW, QLD, Victoria and New Zealand.

The Ultimate Sprintcar Championship will again boast a field in excess of 50 cars with teams entered from the Northern Territory, Queensland, West Australia, the ACT and New South Wales.

Farr won the last main event held at Valvoline Raceway a fortnight ago but third generation racer Matt Dumesny may be more determined than anyone to avenge his disappointment of leading almost the entirety then finishing second in the same event.

Feature race winners so far this season include Sam Walsh, Robbie Farr, James Thompson and Grant Anderson – all of which would love to repeat their early season victories.

Kellyville’s James Thompson leads the Ultimate Sprintcar Championship points currently from Matt Dumesny who, despite not winning a main event as yet, is very much in contention in second place along with fellow young gun Daniel Sayre in third.

Current points in the USC NSW Sprintcars Championship are as follows:


Nomination list for the Speedcar Super Series so far:

Fender Benders are also on the program this Saturday night, December 9.