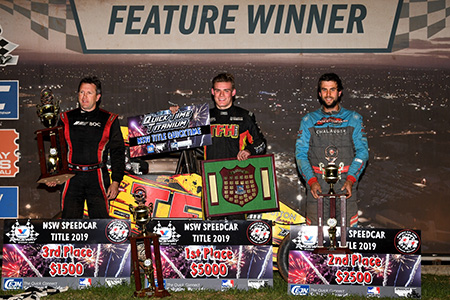 The teenager moved from the second row of the A-Main after starting behind the front row of veteran Troy Jenkins and Kiwi live-wire Brad Mosen to score his first consecutive major feature race victory.

Brown steamed home to win from an elated Troy Jenkins in what his best result in some time for third with the feisty Novacastrian Matt Smith in third.

Nathan Camilleri's incredible season continued with his biggest career highlight to date through victory in the 2018/2019 Australian Legend Car Championship.

Camilleri withstood the many challenges and race stoppages to emerge on top with the #1 after leading every lap to take the win from Rob Rawlings in second place and Glenn Mitchell filling the final spot on the podium.

Sydney young gun Kyle Mock proved that his win in the 50-lapper earlier in the season was no fluke with victory in the final Wingless Sprint A-Main of the season.

Mock was simply unstoppable after starting on front row with veteran Graham Flood and driving away with the green to chequered feature race.

The next event at Valvoline Raceway is this Friday and Saturday night, May 3/4 for the running of the Seamount Racing Sydney City Speedcar 50-lapper.