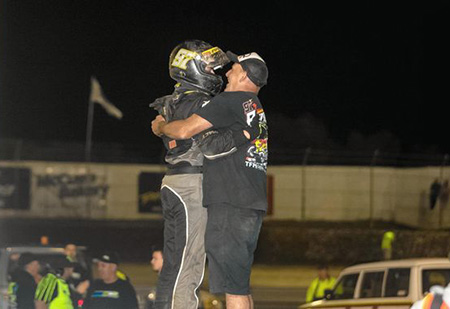 It was also a big night for NSW Karting talent – more specifically the speedway Karting movement – as all three main event winners at the April 27 fixture came out of their ranks.

Nathan Camilleri became an Australian Champion after he took out the National Legend Car Championship in a wonderful career moment, while Kyle Mock was the winner of the Wingless Sprint main event.

These results are indicative of the role Kart racing has played in developing the future stars of the Australian speedway scene and many of the drivers who contested the 77th running of the prestigious New South Wales Speedcar Championship came from Karts.

“It just goes to show the proud role Karting has played in the development of speedway and motor sport talent in general and these latest results are a wonderful endorsement for Karts. It's also a great entry category for youngsters who want to get into speedway,” a NSW Speedway Karting representative said.

The NSW Speedcar Championship is steeped in history and tradition after its inaugural running in 1938 and another page was written on Saturday night, April 27.

When Kaidon Brown greeted the chequered flag as 2019 winner, he also drove into history. The win not only emulated the 2007 and 2009 successes enjoyed by his dad, Mark, but the duo became the first-ever father and son combination who have taken out this historic title.

The only other family connection that previously came the closest to achieving this feat was accomplished by Glenn Revell who won in 1994 at the Newcastle Motordrome.

With that victory he became the second member of the illustrious Revell family to have their name etched in history after Glenn's famous grandfather Ray Revell won the state crown in 1947, 1949 and 1950. This family achievement has stood alone unrivalled for 69 years!

Such is the magnitude of this latest state title result. For Mark and Kaidon to have their names forever linked to the Revell family is a very proud honour and is why this New South Wales Speedcar Championship carries so much emotion, pride and career values to the winner – and Kaidon Brown is a most deserving victor of the 2019 championship.

The race will go down in history as one of the most emotional results in the long history of the iconic event. “I am so thrilled to win this race and what it means to our family. The car ran beautifully all night and I thank my dad and our team for this win,” Kaidon said.

It was a wonderful night of international Speedcar racing at Valvoline Raceway and sets the scene beautifully for the coming weekend's Friday and Saturday nights with the running of the Trans Tasman Challenge Cup (May 3) and the annual City of Sydney 50 lap classic featuring the strong New Zealand contingent against Australia's best.