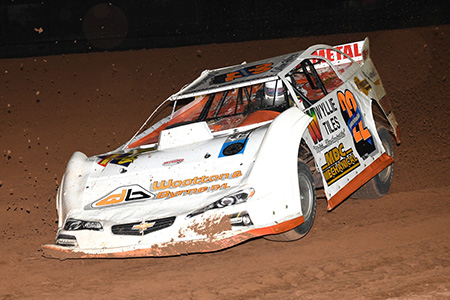 Coming off the success of the 1st annual running of the innovative three=track three-category tournament numbers of contracted drivers have increased wholesale, particularly in the thundering Late Models.

“I like what you’re doing with this Ultimate Speedway Challenge,” quipped Callum’s Dad Jarrod at the end of last season, “we need to support it. It’s a good thing for Late Models and a good thing for Speedway.”

Victoria will see a powerhouse trio represented with former Victorian champion and outstanding teenage racer Cameron “Hammerdown” Pearson arguably the most explosive of the line-up.

Whilst Sprintcar and Speedcar wheeler Domain Ramsay will make his Late Model debut.

South Australia will be represented by the hard charging SALMA boss Matt Crimmins who is itching to get back out on the road after engine gremlins curtailed his season early in 2018/2019.

A fleet of New South Welshmen will have a crack at the Ultimate Speedway Challenge led by dual NSW champion and last season’s standout “the Newcastle Nightmare” Nathan Disney.

Disney will be joined by Raymond Terrace second generation racer Tim Bink and Orange throttle masher Lachlan Onley who is really starting to get his head around the grunty Late Models after initially being a handy Super Sedan exponent.

Gold Coast domiciled NSW jack of all trades Robbie Farr will once again belt into the Hi-Tec Oils #7 after a truly impressive rookie season in the often difficult to adapt to Late Models.

That makes a remarkable ten cars to compete in all rounds against the local talent in Murray Bridge, Sydney and Toowoomba with arguably half the field capable of winning the series.

The dates and venues for the 2019/2020 Hi-Tec Oils Ultimate Speedway Challenge featuring Sprintcars, Late Models and Speedcars are: