FARR GOES BACK TO BACK 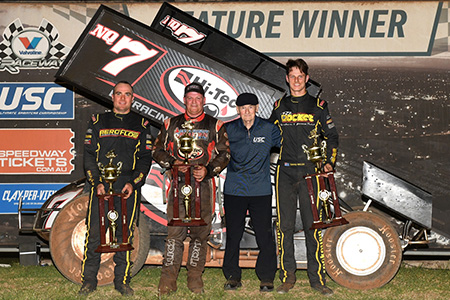 Robbie Farr is the back to back Sid Hopping Shootout winner for 2019/2020 almost thirty years to the day since his first ever podium result at Sydney’s Liverpool Raceway in 1989.

In front of a vocal and staunch crowd the Ultimate Sprintcars, Speedcars and Wingless Sprints put on a show befitting the man who created the arena they raced on – Sid Hopping, the creator of the then Parramatta City Raceway.

For Farr it was his 129th trip to the podium in a stellar career that shows absolutely no signs of slowing down.

For Kaidon Brown it was win #101 for Brown Family Racing over three generations and a back to back success for him after his victory at Hi-Tec Oils Toowoomba Speedway last Saturday night.

For Leighton O’Brien his pressure cooker win was a huge relief, taking away the stress of feeling like he might not win a main event in Valvoline Raceway’s precarious tenure at the Wentworth Street iconic venue.

Sid Hopping and son Steve stood on the kerb to wave the chequered flags for the four-wide salute as Sid’s grandson Jake Baines paced the field in his DTM Sprintcar with as special tribute top wing like Sid’s famous “Batmobile” and also getting a special clearance to run the number #100 like Sid.

It was Ben Atkinson who started the A-Main on the front row alongside former track champion James Thompson and it was Thompson who jumped to the lead in turn one before Atkinson sailed around the top in turn four to reclaim the top spot.

Peter O’Neill exited from the event early with a heavy rollover that brought on the reds.

Something seemed to be troubling Thompson who lost five or six positions in the first two laps whilst Atkinson steamrolled away.

The yellows came on shortly after when Daniel Cassidy’s wounded #15 ended up against the infield concrete wall.

At the restart with 26 laps remaining Sam Walsh moved into second ahead of Farr, Brazier and Delamont.

At the time, not many saw multi-generation young guns Marcus Dumesny and Jessie Attard make their plays from the seventh row of the grid and begin immediately hustling cars on the outside.

Robbie Farr moved into the lead shortly after and Walsh slipped by fellow Rocket/Aeroflow sponsored driver Ben Atkinson to begin running down Farr.

With fifteen laps remaining Sam Walsh pulled a slide job on Farr in turns three and four to briefly inherit the lead before the Hi-Tec Oils Cool moved back into the top spot going into turn one.

Michael Stewart lost the handle in the slick in turn two in the Global Racing #71 and spun to bring on the cautions briefly blotting what had been an impressive double-duty copybook after early finishing a narrow second to feature winner Brown in the Speedcar A-Main.

At the greens Atkinson challenged Walsh in one and two on the bottom before Sam jumped the cushion in three and four and allowed the Darwin hard charger to slip back into the top two as Farr zoomed away.

Jordyn Brazier was fast, as was Matt Dumesny and Jackson Delamont in the top five position whilst Marcus Dumesny and Jessie Attard had continued their ferocious runs towards the front hammering down the cushion when most were clinging to the bottom.

Marcus got as high as fifth before losing ground and falling just outside that spot despite a barnstorming drive with dance partner and fellow teenager Attard.

Farr flashed home to win from Ben Atkinson in second scoring a long overdue and well-deserved podium finish after an almost two-year drought from getting the hardware in an A-Main at VR.

“This place means the world to me,” said Farr, “this one’s for Sid and all of the Hopping family for all that they have done to make this sport what it is. And to the current Waldron family too for all that they are doing. It’s an honour to win back to back Sid Hopping races.”

Kaidon Brown was simply brilliant scoring a clean sweep of his two heats and the A-Main victory in his TFH #97 but it was far from an easy road at any time for the talented teenager as he wrapped up his first VR feature win of the season.

Fresh off his Toowoomba win the “Pup” was able to despatch the flying Jenkins brothers and move into the lead from position nine originally.

Dan Biner started the new Syndicate Mopar King off the front row and led early before first Troy and then Darren Jenkins in the “#WeAreVR” liveried Mopar began reeling the leader in.

With 20 laps remaining Troy Jenkins moved the new look Swap’n’Go #78 Spike into the front spot and little bro “DJ” followed him through into second relegating Biner to third and effectively into the clutches of the fast moving Kaidon Brown and Michael Stewart.

Harley Smee and Matt Jackson looked typically racy inside the top ten as did DJ Raw for his eventual seventh place finish and it was great to welcome back Wollongong veteran Gary Rooke in the distinctive #42 car.

With nineteen laps to go Kaidon Brown began cracking and ripped through to third as the Jenkins boys played out a fantasy possible 1-2 result between them with Troy on the top side and Darren down low.
This was the opposite of how it usually plays out.

In the blink of an eye the field had played a bit of Swap’n’Go with Troy Jenkins as he was shuffled back to fourth behind new leader Darren Jenkins, Kaidon Brown in second and Michael Stewart third with seventeen laps remaining.

A restart when Patterson spun saw Brown storm to the lead in turn one on the inside and Matt Jackson looked like he would be a handful in a feisty fifth position.

With fourteen remaining Stewart pulled a slide job on Jenkins for second with the pair consequently making contact twice before Stewart moved through and began chasing down Brown.

Jackson was attacking Troy Jenkins with eight to run as Brown and Stewart ran the lapped traffic like bosses on the top side.

Jamie Hall brought on the yellows with six laps remaining when he spun in turn three and four and at the restart Stewart threw everything quite literally at Brown but couldn’t get close enough to make a passing attempt.

Brown finished off a clean sweep to take the win ahead of Michael Stewart in second and Darren Jenkins third.

The win is a great build up for the teenager as he prepares for a dream drive in the Matt Wood Midget in the USA later this month.

The 33-year old from St. Clair in Sydney’s West took the X-Presso Mobile Caf� / JME Excavations car to a very narrow victory and became yet another different winner in the Wingless season so far at VR.

There has yet to be a repeat winner.

A number of spectacular incidents of varying seriousness made the A-Main difficult to get a rhythm but the hard luck story of the race was undoubtedly the man who led for the majority Jarrad Rust.

With a big chance for a win or at podium or at the very least a top five Rust tragically spun out in turn one and rolled with the end of the race in sight – seeing his chance for a major main event personal best disappear in the dust despite a fantastic drive to that point.

O’Brien timed his run brilliantly to make a three-wide pass on the cushion in turn four with three laps to go just before Rust’s exit passing Mark Blyton and Luke Sayre in the process.

The race was declared at that point leaving O’Brien as a deserving winner for making the timely gutsy move over Luke Sayre in second place and Mark Blyton third.

Sean Mayo’s spectacular flip was part of a chain reaction that saw multiple cars upside down and taken out early in the shortened 21-lap affair including Peter Granger, Nathan Dicker and Jason Bates to name a few.