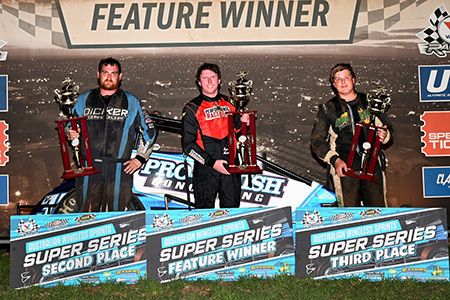 Congratulations to Wingless Sprint Super Series Round Two winner Dayn Bentvelzen for taking out the gruelling main event from Nathan Dicker in second place and Andrew Sayre in third.

Official placings for the A-Main:

Britten led home Victorian standout Brett Clarke in second and Lismore's Mark Robinson in third in the final hit-out before the Aussie title on February 21/22.

The Aussie Championship will be a barn burner!

Official results for the A-Main were:

FERGUSON FLIES BUT IT'S NATHAN'S NIGHT
Warren Ferguson made a welcome return to Speedcar racing but it was Nathan Smee who got the job done in the Speedcar main event last night at Valvoline Raceway Parramatta.

Matt Jackson trailed Smee and Ferguson to complete the podium.

Smee took the Wollongong Auto Parts GRD to his first win of the season but it was cool to see Warren Ferguson return to his roots with a great runner-up position in the category that started it all for him at the then PCR.

It was also cool to see Reid Mackay return to the top five and DJ Raw continue his speedy form to run fourth.

Cam Malouf recorded one of his best results for seventh and West Aussie Keenan Fleming made the long trek east to record a 13th position finish.

Liam Camilleri backed up his earlier season victory with another A-Main success last night at Valvoline Raceway Parramatta in the Legend Cars battle.

Camilleri now has a back to back record as he lead home John Egan and Jacob Griffin to complete the podium last night in exceptionally warm conditions.

In a category where it's hard to even get one victory the idea of going back to back is no easy feat and there will definitely be a target on the Sydney teenager's back when the Legends return when he shoots for a hat-trick.