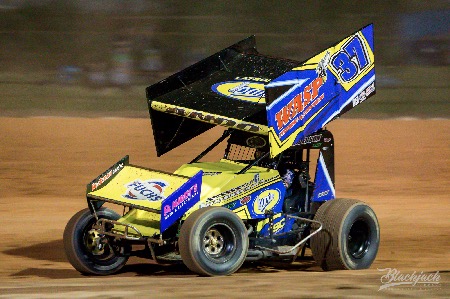 The Albury NSW second generation racer finally clinched his career first Valvoline Raceway main event success last night in the Brian Healey Gold Cup and in the process dedicated the milestone to a close family friend whose father had passed away suddenly the morning before.

“We have a really special friend and sponsor of our team who lost her Dad just yesterday,” Anderson explained on the podium, “he was always a big supporter of mine and I know that the whole family is really hurting right now. I really want to dedicate this win to Laurie.”

Anderson sped the #37 WASP/Bandag Latrobe Valley entry from the tenth row of the grid to run down and pass entire racer leader Daniel Sayre in dense lapped traffic.

“We got a great start,” breathed Anderson, “and we were able to do just pick our way through traffic and make the most of our opportunities. I can’t explain what it means to finally win here after so many years of trying.”

Teenager Sayre was gracious in defeat, still managing an optimistic smile and thanking sponsors and family for their support after nearly pulling off the win of his short career.

“It’s very encouraging for us to run like that, it gives me a lot of confidence that we can do something like this more often. It’s not easy but it shows me we can do it.”

“Congratulations to Ando and Daniel, they both did a great job,” said the defending USC champion, “we’ll take third place tonight and bank some points. I got a terrible start and really didn’t put us in a position to get the win, so we’ll take this podium tonight and move on. It’s a long season ahead.”

Former USC Champion Jamie Veal looked destined for a podium finish as a minimum but contact he between he and Shaun Dobson in turn three saw the #35 SWI Maxim spin to a stop and have to begin from the rear of the field at the restart.

Veal stomped back to an eventual seventh place in the laps that followed.

Albion Park Rail USC racer Steve Caunt had a bruising wreck in the B-Main where he all but totalled his ex Kasey Kahne entry and was briefly knocked unconscious in the rollover in turns one and two.

“The track was beautiful,” smiled the second generation victor, “the car felt really nice throughout the entire race and I knew we had a good chance of getting the win if I could keep hitting my marks.

17 year old Kaidon Brown recovered from a second heat rollover on the start on the main straight to return in the main event and finish fourth.

The A-Main was marred by a violent flip for Michael Jordan in an earlier heat when the right front wheel appeared to sheer off as he entered turn one.

The Dominator Engines #6 flipped many times coming to a rest against the turn two fence where Jordan fortunately emerged unscathed much to the relief of the big crowd on hand.

Typically hectic and competitive racing was again a hallmark of the Legends class and the traditional battles between the youngsters in the category is off to a good start already on Night One.

The next event at Valvoline Raceway is this Saturday, October 7, with Late Model sedans, Wingless Sprints, Street Stocks and AMCA Nationals.
USC Sprintcar action turns to Murray Machining & Sheds Speedway Murray Bridge in South Australia for the Bill Wigzell Battle of the Bridge and first round of USC SA.