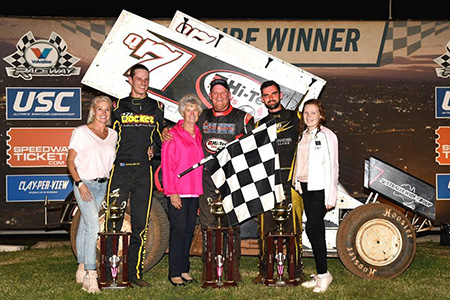 Robbie Farr and Matt Jackson were jubilant winners of the Ultimate Sprintcar and Speedcar main events for the GT Challenge honouring the memory of George Tatnell on Ultimate Pink Night.

The Sprintcar feature was a good old fashioned dogfight between Farr, Sam Walsh and Alex Orr making it two fantastic USC main events in a row with last weekend at Murray Machining & Sheds Speedway Murray Bridge in SA also off the charts.

For Farr it was vindication in Sydney to make up for the USC SA event where local hero Matt Egel stole the lead from him on the final lap.

Alex Orr's fantastic season continues with his second podium finish of the season.

Some points of note and personal season bests include Grant Tunks' top five, James Thompson back from illness with a solid top six and Daniel Cassidy's top ten result.

Matt Jackson again proved that he is one of the hottest drivers in the country with another season win to score the GT Challenge victory ahead of a confidence boosting result for Nathan See in second and Matt Smith again right up in the order with third place.

Once again 'the two Matts' were right up the pointy end of the field in what has been an amazing year for the pair so far.

Top Ten results for the GT Challenge for Speedcar:

A huge crowd turned out on "Ultimate Pink Night" to raise money and awareness for the National Breast Cancer Foundation in the annual affair held between sister tracks Murray Bridge, Parramatta and Toowoomba.