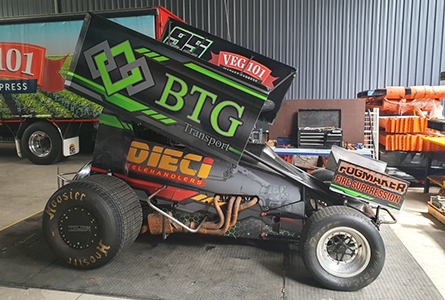 American Sprintcar driver Ryan Bowers is an unexpected and exciting bonus for Valvoline Raceway with three rapid-fire appearances over the Christmas-New Year period.

The Ham Lake Minnesota native is joining forces with Sid Moore Racing and Daniel Needham to take the wheel of the #95 BTG Transport / DIECI Telehandlers entry on December 28, December 30 and January 1.

“I’ve never raced outside of America so this is a really exciting opportunity for me,” Bowers admitted earlier today, “I can’t wait to get down there and get acquainted with the car.”

Bowers is a highly regarded 360ci and 410ci racer and currently competes in the UMSS Sprintcar Series in his home state.

The 36 year old will first need to conquer his fear of heights to get in the plane for the 14-hour haul to Sydney from LA but he certainly doesn’t have a fear of going fast.

Away from racing Sprintcars Ryan plays MN Wild Hockey (Ice) rides motorcycles and snowmobiles and the father of two sons is amped about racing ‘down under’.

“I’m really excited about driving for Sid and Daniel and getting to experience Australian racing for myself,” he says, “I’ve been good friends with Brooke Tatnell for years and I’ve always wanted to get down there. I’m sorry I can’t come down for longer but I have racing commitments back here as well. This trip I hope to put in a good performance and show people down there what I can do. I hope that this leads to a longer term arrangement in the future and I can’t thank Sid and Daniel enough for the opportunity.”

Bowers, who has scored main event wins at Ogilvie and Cedar Lake Speedways this year, is very much a ‘hands on’ racer not afraid to get his hands dirty and work on all aspects of the race-car.

Ryan will compete in three nights over five days at Valvoline Raceway along with fellow Americans Brad Sweet and Donaven Prather.

His wild card inclusion is a big bonus for Sydney fans.