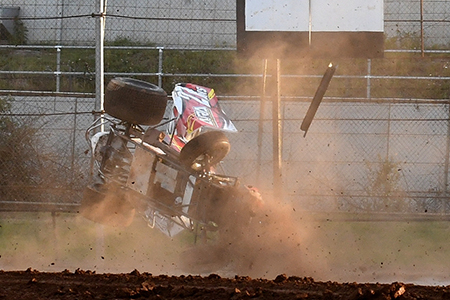 Traditionally one of the biggest nights of the season and the start of a hectic Christmas-New Year period the Boxing Day bonanza is an annual summer tradition for thousands of fans throughout NSW.

After the incredible standard of the last USC Sprintcar main event held at Valvoline Raceway on December 8 for the George Tatnell Challenge in which Robbie Farr, Alex Orr and Sam Walsh went at it more of the same is expected this Wednesday night.

West Coast American Donaven Prather will make his Australian debut and whilst he'll be the lone USA racer on the 26th he can take heart that on December 28, December 30 and January 1 he'll be joined by fellow statesmen Brad Sweet and Ryan Bowers.

Several father and son and brother combinations have lined up for the annual 35-lap Valvoline AGP - one of the most historically significant events on the Valvoline Raceway calendar.

USC rookie Kyle Angel will be hoping for a successful and smooth return to racing after some hectic weeks of competition where he wrecked in spectacular fashion on December 8.

The hard charging youngster is undaunted however and approaches Wednesday with typical swagger and enthusiasm.