THE BIG CAT TO BRING THE BOOM FOR ULTIMATE SYDNEY SPEEDWEEK 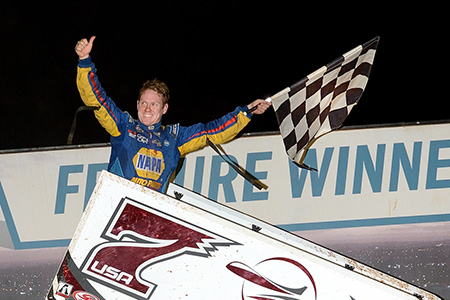 The Grass Valley native has a penchant for pinching main event wins in Parramatta and this year he’ll be doing the same driving once more for Sydney’s Mark Cooper in the American Tire & Racing Services Spike chassis.

Sweet teamed up with expatriate Kiwi Cooper for a brief and eleventh hour stint late in 2018 but will come with a more comprehensive campaign this time around to compete in the entire Speedweek.

The Ultimate Sydney Speedweek will be contested over a storming two week period at the iconic Valvoline Raceway Parramatta with some stirring prize money and points fund incentives guaranteed to attract some of Australia and the USA’s best.

Currently sitting second in the 2019 NOS Energy Drink World of Outlaws Sprintcar Series Sweet is in fine touch driving the KKR #49 and will no doubt bring that boom down under come December.

The defending Knoxville Nationals Champion is no stranger to victory lane at Valvoline Raceway where he has been a dominant force.

Race fans will grin, his rivals may frown, but the return of ‘The Big Cat’ for the Ultimate Sydney Speedweek is a major, major boost to the spectacular event.