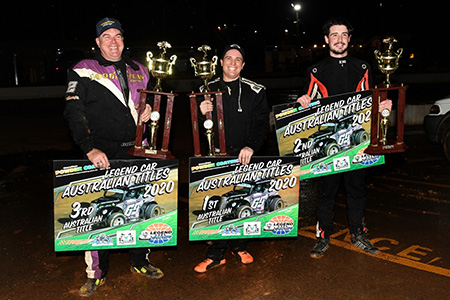 Keanu Palma and Jason Griffin rounded out the top five.

Scott Cannon recorded another win in the V8 Dirt Modifeds continuing what has been a standout season for the Maitland hard charger.

Cannon took the win over Blake Eveleigh and Darren Todd to fill the podium with Mark Griffiths in fourth place and Wayne Simpson rounding out the five.

Marshall Blyton was a jubilant victor in the Wingless Sprint main event from a season best VR finish for Tyson Williams claiming second over Mark Blyton home in third making it a 1-3 for the Dubbo Blyton crew.

Marshall recorded his first ever victory at Valvoline Raceway in a main event and was understandably ecstatic to be able to record the win.

"It was his first win there (Parramatta) and I couldn’t run him down. It's a great moment to see him have a win. He just wanted to win there once before Parramatta's not there anymore," said proud Dad Mark this morning.